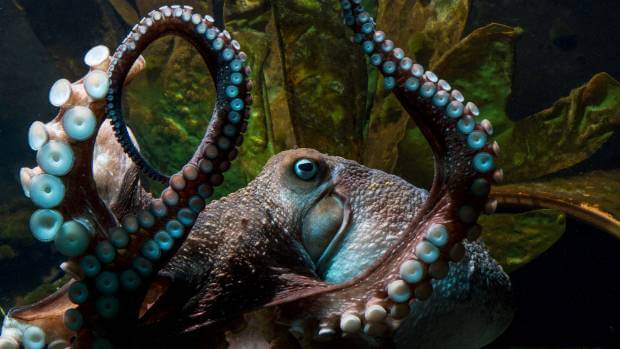 had attempted (and succeeded with) his great escape to freedom and this had made headlines around the world!

Inky, a male common New Zealand octopus, made the daring late-night getaway from the National Aquarium in Napier by squeezing his rugby ball-sized body through a small pipe.

On reflection, the incredible dash for freedom appears to have been painstakingly planned. An illustrated diagram of Inky’s escape shows how the octopus, who was pulled out of the ocean two years ago, left his tank in the dead of night via a tank overflow drain.

Octopus tracks show he then slipped his way two metres down to the aquarium floor, before making his way another 2-3 metres across the floor to an external drain.

Who knows if Inky knew what was down there, but if he didn’t, he was brave enough to give it a go, and the punt paid off.

The octopus would have then have had to slog another 50m along the pipe – which measures just 150 millimetres in diameter – before finding himself back home in the ocean.

The whole world appears to be taken with Inky’s Shawshank Redemption-style story, with headlines across the globe, from the New York Times – which described him as “audacious” – and CNN to the BBC and The Guardian.

Aquarium staff noticed the next morning that Inky’s fellow inmate, Blotchy, was all on his lonesome. A high and low search through the aquarium’s drains yielded no sign of the escapee.

Clearly upset by Inky’s disappearance, they hoped they might yet see him again.

“You never know,” aquarium manager Rob Yarrell told The Guardian. “There’s always a chance Inky could come home to us.”

He described Inky as scarred and “rough-looking”, with shortened limbs from fighting with fish – but stopped short of issuing a public appeal for anyone who saw such an octopus to come forward.